ATHENS, GA -- The UGA department of theatre and film studies presents an experimental work with the Rosetta Theatre Project. This exhibit will be held on November 2-3, 2018, at 3:30-7:30 p.m. and 5:30-7:00 p.m., respectively, at the Dancz Center in the Hugh Hodgson School of Music. Free and open to the public.

The Rosetta Theatre Project is a unique performance experience structured like an exhibit in an art gallery, allowing guests to come and go at will and experience an immersive, ever-changing theatrical art installment. The project uses live motion-capture technology to present two short scenes, one from Shakespeare and the other from Moliere, on a continuous loop. Each scene will be instantaneously translated into four different versions, two in English and two in French. Using a real-time motion capture system, live performances will be transformed digitally into four different computer animations, each representing a distinct time period and culture: sixteenth century England, seventeenth century France, modern-day Paris, and modern-day Athens, Georgia.

A part of UGA’s Spotlight on the Arts festival, this project is an interdisciplinary collaboration among many departments. Dr. David Z. Saltz, the head of the UGA department of theatre and film studies, worked closely with Dr. Sujata Iyengar (UGA department of English) and Dr. Peter Lane (School of Music), who is composing a dynamic score for the event. “It is designed to appeal to people in a wide range of different fields, including Theatre, Music, Art, English, French, History, Animation, and Gaming.”

Liz Gubler, a second year scenic design MFA student at UGA, is excited to be modeling the sets for this project. “It’s challenging, for sure, and I’m learning a lot about Maya, the modeling software,” said Gubler. “This is a great opportunity to apply my skills in a really unique way and make something different.” Working with dramatic media MFA student Jason Woodworth-Hou, who is modeling the props for this performance, Gubler faces the distinctive challenge of effectively portraying several places and times. For the media director Anna Corbould and costume designer Mirabel Lee, their contributions to this project will serve as their M.F.A. thesis projects.

This work explores the way we interact with language and culture on a day-to-day basis. It will allow spectators to experience artistic expression at their own pace and in their own way. According to Saltz, “The performance will encourage spectators to confront the way language, appearance, and other signs of culture and status affect our perceptions and interpretations of the people and cultural artifacts around us.” 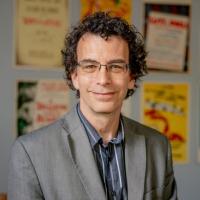