In July 2019, the UGA Theatre’s production of Peas, Pierre Patelin, and Purgation, or Three Farcical Arts of the Deal traveled to Genoa, Italy, for the sixteenth triennial colloquium of the Société Internationale pour l’Étude du Théâtre Médiéval. These three farces demonstrate the difficulties of living harmoniously with people when our needs conflict and negotiating with people who we don’t trust—problems as pressing now as they were when modern commerce and legal practice were taking shape in the late fifteenth century.

Dr. Carlson also presented her research on "Marginal Performances by Late-Medieval Pigs and Blind Men" for the colloquium.

Thanks to all who donated to the Georgia Funder campaign, and the Sylvia Hllyard Pannell Student Travel Grant and the Lucas2 Theatre Support Fund, for making made this tour possible! 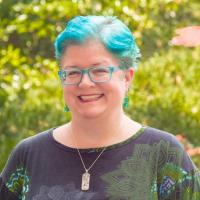